Posted on September 23, 2012 by ThePeachy1 in The Peachy Tree

So I don’t tell people.  Why?  Lots of reasons I guess.  I found early on that Doctors, nurses, friends and family reacted as if I had something contagious.   Or worse.  Made up.  Dreamt up.  An excuse.  Sure it took 7 years of Doctors and emergency rooms with seizures, and migraines and the oddest possible  symptoms on the planet to finally figure out what was wrong.   No Doctor did.   In May 2009,  I was told by a neurologist to go home, sit on my couch and wait.   Wait to hear from a Brain surgeon, or wait for the next round of symptoms.   They didn’t even tell me the name.  They simply said, your brain has herniated.   It’s been years since that day, and it’s been miles emotionally.    I found out who can and can’t deal with this,   who it pains to be informed so much that I tell them it’s all better, and who are just simply put, total fucking idiots who you couldn’t educate with a  brain transplant. this is pretty much the BEST medical outcome. Usually they think you are drunk.

I’ve met the ” best Doctors and Surgeons ” in our area ( that includes the states on both sides of us)  and  Most can’t even pronounce Chiari.   What’s even more sad as that NONE of them seem to have ever read. picked up, or even googled the word,  some have, right in front of me.  It used to scare me to watch the horror on their oh so smart faces as their eyes scanned down the googled page in front of them and they realized that this talking ( sometimes stuttering) walking ( sometimes falling )  human in front of them is indeed what they are reading on the internet.   Now it’s either funny or my  test,  if I am sent to a gastro and bring up the Chairi and they say something as stupid as,  ” your brain has nothing to do with this”.  I know that basically that doctor is worth their weight in dog hair.  Because after  several years of personal research,  and sending my medical records and results both around this country and to others where they actually STUDY Chiari, I found out from one of the smartest Brain Surgeons on the planet.  That the BRAIN CONTROLS EVERYTHING.   Sounds simple I know, but try telling some shitard with a God Complex that it’s quite possible they may NOT know EVERYTHING.   It’s best to just smile and then  add them to the list of people you will NEVER entrust your body and life to again.

Sadly I personally know of so many who have been told it’s nothing, and passed.  Even the “procedures” are not always a cure, and yes they are drastic, no it’s not pretty, and yes it’s very risky.      If you want to know more google “zipperheads”.     Even after this almost everyone I know still suffers with the pain and the symptoms that just can’t be fixed.    But nothing breaks your heart like hearing about the kids.

I’m not active in any Chiari Community.  From what I can tell there are 3 groups,  warriors, survivors and angels.  You can pretty much figure out who is who and why.  In addition to this absolutely wonderful Diagnosis there is an entire CIRCUS  TRAIN of freaking co- Diagnosis that go with this that basically will explain everything in your life from dropping an egg to the awesome ability to always be the cheerleading captain because you can do the splits with no issue.

Here is my big ass oh so sexy brain –  prepare to be stunned and impressed. Don't be jealous of my big sexy brain.

So that’s the story that’s the deal, no more hiding it.  There are online support groups out there for friends and families.   In the larger cities there are actual groups,  then there are organized walks for awareness and research and fundraiser and all that stuff that really helps so many.  So if you are up for it, and feel like taking a stroll.  September is Chiari Awareness Month.   Walk for someone who can’t anymore,  or wont one day. There are walks everywhere this month,   CA, PA, FL, NY, TN, and a ton of other places.  Check it out if you are up to it.   I’m not an expert, I’m not a guru, I’m not a leader.  In fact very few in the internet world even know I have it.  Few in my real world know.  Because it seems as if people treat me different, or expect less.   Except those that roll there eyes, or sigh, or cringe or simply walk away.   So for self preservation I don’t bring it up, especially to the people who think they already know everything, and honestly there’s a shitton of those kind of people out there.    But now you know.  Consider yourself WAY more educated than 90%  Doctors and  75% of Surgeons.  It didn’t cost you a thing and took way less than 8 years. You are welcome. 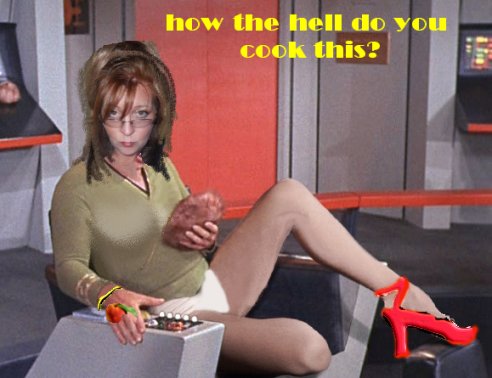 Captains Log: Star Date 08012012.. we have been adrift in the norefridgerated zone of Galaxy Suck for 4 days now. The crew morale is on the downslide and quickly become a safety factor. The food replicators are down. We lost all food supplies when it was jettisoned out of bay 2 like Spocks body in that one episode. We lost supplies as the attack of the alien life form known only as “thisshitsgonnaspoil” infiltrated deck 1. The crew staged a revolt against the cook last night, and she only survived by throwing poptarts and honey buns at them. Communications inform me that we were able to get a message to StarFleet. However apparently they are stuck in an insurance wormhole and we must be patient. I’m not sure how much longer we can maintain safety and harmony. Kirk out.

Hide yo kids Hide yo wife, they frying everybody up in here….   Ok seriously this is insane.. I knew this would happen. yeah I would explain but seriously  I have to get to a mountain range so I can find a cave..   I was prepared for zombies, not being bitch slapped by the sun….   good luck y’all.