HI my name is ThePeachy1 and I am a moron.

If you hare having Turkey might I suggest you go ahead and buy that today.  There is of course a reason I say this, I don’t just go throwing suggestions out all willy nilly. 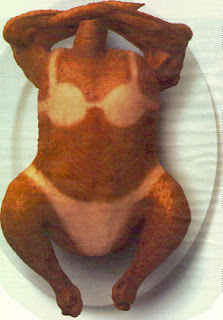 I always over cook for all holidays,  invite everyone, including strangers and military people I don’t know who may be all alone. It’s my thing. I have always done it. I never have less than 6 people but could have up to 25 or 30 any given holiday. Everyone is always welcome, it’s a serious production and I cook for days to prepare.  But in 2004 I started having funky undiagnosed medical issues, in 2005 Hurricanes kicked our financial butt and we have been working hard  to recover but not quite making it.  In 2008 my daughter moved out for college in 2009 my son had moved out. I took both of these events really hard and they happened within 50 days of me founding out what my medical problems were, which was just not good news on any level.On top of all our family issues, one of my long time friends had just suffered a serious major medical issue and it was touch and go in ICU and I worried about her and her young family although I was helpless and heartbroken. To say the holiday mood just wasn’t upon me would be an understatement.

No one else in the family ever cared if I had the  HUMONGO  event I always thought I needed, in fact they usually rolled their eyes and avoided me acting like I tortured them into being there.  Honestly it  was my own neurotic we HAVE to have a tradition mental status that drove it, and I just didn’t have it in me last year.

The day before Thanksgiving my daughter shows up and  then my mom calls. OH holy bat turds. You mean I have to climb out of my pity party and pull this off again folks?  Also I need to do it on a budget of -42.57  well this is just already smelling of sparkly awesome.

I slipped off my proverbial pity party water wings and did some financial magic tricks. ( you know that proverbial money tree the husband and kids think you have, yeah it involved that.) Against my better judgement I bothered to get out of my pajamas and actually went to the store to buy a turkey.

There are a few problems with buying a turkey on the night before Thanksgiving.

#1- You know you will have issues thawing it

#3- combine 1 and 2 and you get holy craptastic bird day folks they only have hypothermic birds that a only second mortgage can purchase and they aren’t available in any store located in my state.

I finally at the 3rd store found a bird but it cost more than my vehicle. I kept looking,  store number 4 was a waste of time but I got a twix bar and mt dew  to  rejuvenate me in battle, because they were straight up out of double mocha latte Valium.  The 5th store I found a bird, although he was roughly frozen to the solidity state of a cannon ball he was less than the cost of a bionic arm so I bought him.  But not before I dropped him and actually cracked the tile on the supermarket floor.  Sorry about that unnamed store that was me.  Well actually it was your bird and therefore your bad.    I blame you since you should have had it somewhat thawed by Thanksgiving eve your a bunch of shatards and obviously deserve broken floor tile.

So by 6pm I am home with a bird that there is no hopes of thawing and cooking for 1pm feast in just 17 hours.   Panic + Vodka = Epiphany. ( that is math question number 2, well sort of, it’s a word problem but it has math symbols so I guess it’s higher math or something.)

I threw the bird in the hot tub and turned on the jets.  I sat and watched him spin head over nubby little would be feet and figured I would drain then bleach and possibly burn the hot tub afterwards.  See I have this aversion to poultry.  Kind of like my aversion to bugs.  If I see a bug I will go to any lengths to make sure it and anything it touched pays dearly. With poultry, I have to bleach repeatedly anything that could have touched it, or throw it away.

I wasn’t sure if it would work. Would this sexy hunk of arctic poultry thaw. Would it reach a temperature that bred some bacteria that would send us all to the ICU with some funky butt explosion disease?  Was I going to run out of Vodka before this damn bird finished spinning missing head over butt ?

So the long and short.  It worked, the Turkey was tender, and juicy and yummy. In the culinary world it would have been described as very relaxed. But wouldn’t you be after 5 hours in the hot tub?

It was cooked and served on time.  I was thankful that my family through all their years of faining eye rolls and acting like they hated my tradition actually wanted and expected it.  I was Thankful that I was physically capable of gathering and making Thanksgiving dinner.  I spent Thanksgiving bleaching the hot tub and being Thankful I had found a stinking turkey and had a hot tub to thaw the damn thing out in.  I also found it’s spinning very hypnotizing, or it could have been the vodka, not sure.

So go forth and win the epic battle of Monday knowing your not alone in your journey of suck, you are in good company.  Me and my Local news.. Ok partially good company.